New York’s Agricultural Districts Law, Article 25-AA of the NYS Agriculture and Markets Law, was enacted in 1971 to help keep farmland in agricultural production. The ADL recognizes that agricultural lands are important and irreplaceable resources, which are in jeopardy of being lost to as a result of increasing costs of agricultural businesses, development pressures and regulatory constraints. The Law seeks to create economic and regulatory incentives which encourage farmers to continue farming. The ADL has two basic components, agricultural assessments for taxes and agricultural district creation and review.

Agricultural Districts are designed to protect agriculture through a combination of landowner incentives and protections that discourage the conversion of farmland to non-agricultural uses, including:

Agricultural Districts are reviewed by the County and re-certified by the New York State Department of Agriculture and Markets every eight years. During the review, landowners can decide if they want their property to remain in the District, or be removed or added. Owners of property within the Agricultural District will receive a mailed written notice of review.

After the open period ends, the County Agriculture and Farmland Protection Board will review the requests and prepare a report that is submitted to the County Legislature for their consideration. The Legislature will then hold a public hearing to receive feedback on the requested modifications, if any. Once the County Legislature has approved of the changes, the report is finalized and sent to the New York State Department of Agriculture and Markets for re-certification of the District. This process typically takes eight to ten months. 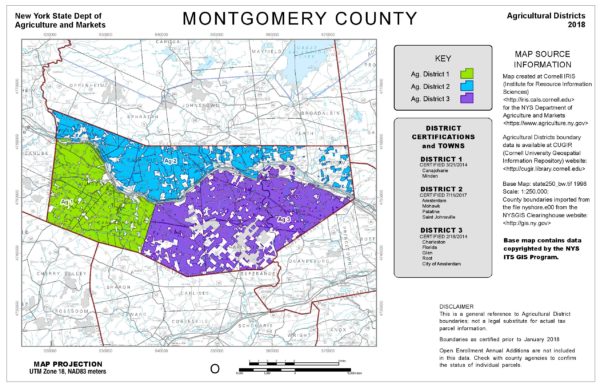 What is an agricultural district?
A geographic area which consists predominantly of viable agricultural land. Agricultural operations within the district are the priority land use and afforded benefits and protections to promote the continuation of farming and the preservation of agricultural land.  In practice, districts may include land that is actively farmed, idle, forested, as well as residential and commercial.

What is an agricultural district review?
Districts are usually reviewed, or renewed, every 8 years. The County Legislature, after receiving the County Agricultural and Farmland Protection Board report and recommendations, and after a public hearing, determines whether the district shall be continued, terminated, or modified. During the review process, land may be added or deleted from the district.

Counties are also required to designate an annual 30-day period when landowners may petition the County for inclusion of viable agricultural lands in an existing agricultural district. In Montgomery County, the annual review takes place from September 1st to September 30th each year. You can find an application here.

Does an agricultural district guarantee a farmer’s “right to farm”?
The ADL protects farm operations within an agricultural district from the enactment and administration of unreasonably restrictive local regulations unless it can be shown that public health or safety is threatened. The Department evaluates the reasonableness of a specific requirement or process imposed on a farm operation on a case-by-case basis. The Commissioner may institute an action or compel a municipality to comply with this provision of the ADL.

Do agricultural districts consist entirely of farmland?
Districts must consist predominantly of viable agricultural land. Predominance has been interpreted as more than 50 percent of land in farms, but most districts have a higher percentage. The benefits and protections under the ADL, however, apply only to farm operations and land used in agricultural production.

Do agricultural districts eliminate a municipality’s ability to control growth?
No. To the contrary, an agricultural district can be an effective tool in helping local governments to manage growth. The existence of a district, for example, can help direct development away from traditional farming areas.

Can government acquire or condemn farmland within an agricultural district against a landowner’s wishes?
The ADL does not supersede a government’s right to acquire land for essential public facilities like roads or landfills. However, the ADL provides a process which requires a full evaluation of the effects of government acquisitions on the retention and enhancement of agriculture and agricultural resources within a district. 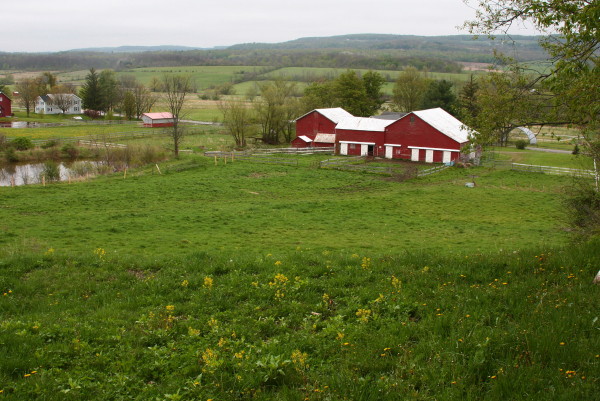