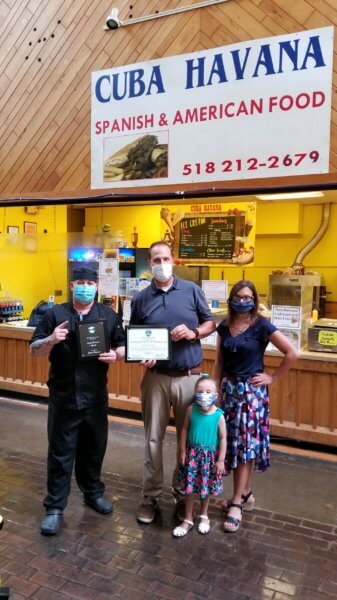 (AMSTERDAM, NY) – For three-plus months many essential workers have faced relentless workloads because of the COVID-19 pandemic, especially healthcare employees and first responders working on the front lines against the virus. To help those caring for others during this time of unprecedented need, Amsterdam-based Cuba Havana has made food donations to essential workers at the St. Mary’s emergency room, the Amsterdam Police Department, and second shift staff at Wilkinson Nursing Home.

To recognize this local business for stepping up to support the community, Montgomery County Executive Matthew L. Ossenfort and the Montgomery County Business Development Center have named Cuba Havana as the June Small Business of the Month.

“Montgomery County is a place where everyone knows their neighbors and there’s a strong sense of community,” said County Executive Ossenfort. “Alexander Blazquez’s selfless support of our first responders and other essential employees exemplifies the very best of that community spirit. When the chips are stacked against us, we see time and again that our community embraces one another and finds ways to help all.

“On behalf of the county and its residents, I’m proud to recognize Cuba Havana as our Small Business of the Month honoree for June,” said Ossenfort.

After moving to Amsterdam in 2003, Alex saw an opening for a Cuban cuisine restaurant, and founded Cuba Havana in 2018. First located on Forest Avenue, Cuba Havana relocated to the Riverfront Center, where it continues to operate today.

When the pandemic struck, Blazquez said it reminded him that the community in Montgomery County supports each other during the tough times and the good times. He said he has seen an overwhelming support by all the essential workers during this time who come to enjoy a meal and take a breath during their lunch break.

“I am very appreciative and happy to be recognized. Our community does a great job coming together during difficult times and I wanted to do my part and express my appreciation to our essential workers,” said Alexander Blazquez, Cuba Havana’s owner and chef.

“Cuba Havana is a true American success story. We’ve come together over the past number of months and now, as we reopen, we need to support our small business community, like Cuba Havana. The Business Development Center is proud to be able to call attention to the generosity and hard work done by people like Alexander Blazquez during this uncertain time,” said Montgomery County Business Development Center CEO Ken Rose.

Blazquez was nominated by Fabrizia Rodriguez, a local attorney, who noted that, “At a time when many restaurants are struggling to stay afloat, Cuba Havana went out of its way to make food donations that helped feed about 60 essential employees, because the chef told her he saw firsthand how tired and hungry they are when they pick up their take out from his restaurant and he wanted to give back to them and give them thanks.”

Originally from Cuba, Alexander Blazquez, his brothers and father fled from military persecution in the 1993, after they feared for their lives following the assassination of one of his brothers by the Cuban government. A U.S. Navy vessel located the men and brought them to Guantanamo Bay to begin the immigration process. Shortly thereafter, Alex settled in Hoboken, New Jersey, and began working in various restaurants, most notably the critically acclaimed Cuban restaurant, La Isla. Blazquez’s initial connection to Amsterdam was through his two children, who relocated to the city with their families. He followed suit, moving to Amsterdam in 2003.

Since its opening in 2018, the Cuba Havana has been a one man show. As owner and chef, Blazquez, says he arrives early each morning to begin prepping the table entrees, his fresh creole sauce, and baking his pork shoulder “pernil” and flans.

Those wishing to nominate a small business for recognition next month should contact the Montgomery County Business Development Center at 518-853-8334 or email vnicosia2@co.montgomery.ny.us with two to three paragraphs about the business and how it’s making an impact on the county’s communities.